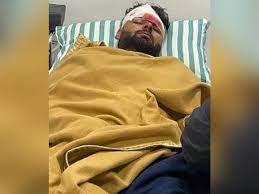 Rishabh Pant, India’s standout wicketkeeper, was hospitalised after suffering a horrific car accident on his way from Delhi to Uttarakhand. Pant was driving his Mercedes car when it caught fire after hitting the fence at the Narsan border, according to Uttarakhand DGP Ashok Kumar.

According to the Director General of Police in Uttarakhand, Pant said he lost control of the automobile after falling asleep while driving.

Pant was the only one in the car when it hit with a road divider and caught fire. He was hurt in the head, back, and leg. The 25-year-old man, who was on his way home to Roorkee, was brought to a nearby hospital.

He was injured in the head, back, and feet, but he is in stable condition.

“Cricketer Rishabh Pant is being monitored by orthopedists and plastic surgeons. His health is steady. His entire medical report will be made public once he has been evaluated. Following that, we’ll proceed with the following measures “In an address to the media, Dr. Ashish Yagnik of Max Hospital in Dehradun stated.

Pant received injuries to his forehead and knee, according to the physicians. Superintendent of Police Dehat Swapna Kishore Singh arrived at the scene after receiving the information. Dr. Sushil Nagar, chairman of Saksham Hospital, stated that Rishabh Pant’s health is now stable and that he has been referred to Max Dehradun.

Rishabh’s Car hit with the fence and caught fire, according to witnesses. The fire was brought under control with much difficulty. Simultaneously, Rishabh Pant was transported to Saksham Hospital on Delhi Road, where he was critically hurt in the collision. Rishabh Pant was left out of India’s teams for both the One-Day International and Twenty-20 International series against Sri Lanka. Pant was not injured, rested, or dropped, according to the BCCI news statement.

The BCCI opted to rest the Delhi wicketkeeper ahead of the two-match Test series, therefore he did not participate in the one-day internationals against Bangladesh. Pant was meant to join the National Cricket Academy (NCA) in Bengaluru for a strength and conditioning programme ahead of the Border Gavaskar Trophy in February, but he was unable to attend the next white-ball series against Sri Lanka, which begins on January 3.

Pant has scored 2,271 runs in 33 Tests, including five hundreds and 11 fifties. He has also played 30 One-Day Internationals and 66 Twenty20 Internationals for his country.