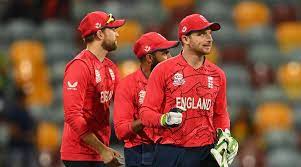 Today whole Australia stood in support of Sri Lanka, Sri Lanka scored 141 runs on a very difficult wicket. At one time England batted very well in the opening overs. But still in the final over drama continue. Ben Stokes unbeaten 42-run knock took England to the semi-finals, thus ending all hopes of Australia.

Australia’s big loss to New Zealand in the first match proved to be very critical for them. Australia, which hosted the T20 World Cup, is now completely out of the World Cup. New Zealand and England are the two teams that have confirmed their place for the semi-finals. The champion team of last year’s T20 World Cup and the winning team of the Asian Cup are now both out of the World Cup.

This was the 39th match of the World Cup. This match was very important for England, on the other hand Sri Lanka was playing but it was Australia’s life. This match played at Sydney Cricket Ground. Sri Lanka won the toss and decided to bat first.

Sri Lanka’s opener started well and added 39 runs in the first 4 overs. After the dismissal of opener Mendis, Sri Lanka’s team lost the momentum. Nissanka scored 67 runs in 45 balls in which he hit 5 excellent sixes. After that Rajapakse tried to handle team situation. He scored 22 runs in 22 balls, due to which Sri Lanka scored 141 runs in 20 overs. Mark Wood, who gave 17 runs in the very first over of his spell, bowled well in the next two overs and took 3 wickets. Mark Wood took three batsmen to the pavilion for 26 runs in 3 overs.

England’s opening batsmen Alex Hales and Jos Buttler batted very well. Both put on 7.2 for the first wicket and added 75 runs. At one point, England’s score was 93 runs for 3 wickets in 11 overs. After that due to the excellent bowling of Hasaranga, difficulties started to arise for England. In the last over, Ben Stokes batted intelligently and took the team to the target. In this way, Ben Stoke led the England team to a 4-wicket victory and ensured England’s place in the semi-finals.